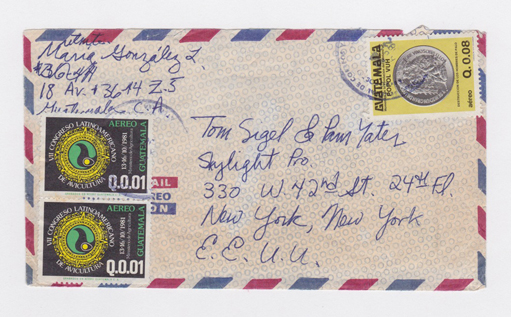 March 1, 2012. The darkened National Theater of Guatemala is completely filled with people intently watching the premiere of GRANITO: How to Nail a Dictator. Towards the very end of the film, Inés, a 16 year-old guerrilla, reveals the concept behind the name of the film.  She says, “We are making a big effort, each contributing our tiny grain of sand, our granito, so that our country can be free.” In the audience that night was Inés’ brother, Valeriano, who hadn’t seen his older sister in 30 years and didn’t know this footage of her existed.

May 1, 1982. We had walked all night long to meet up and film with the resistance fighters of the Guerrilla Army of the Poor. It was in a clearing in the woods in the highlands of the Quiché in the Augusto César Sandino Front or FACS that I first met Inés. She was one of the few women fighters and so self-possessed, a leader even then,  though she was just 16. Her compañeros and compañeras listened closely when she spoke. She was Maya K’iche and, although Spanish was her second language, she spoke passionately about the role of indigenous women in the armed struggle.  I could tell she was a well-trained fighter.

March 8, 2012.  A week after the premiere in Guatemala City in 2012, Inés’ brother Valeriano found me on Facebook. He told me that his sister Inés, whose real name was María Magdalena Pascual Hernández from Zacualpa, had been killed in combat just months after I filmed her for When the Mountains Tremble.  Valeriano told me that 2 other brothers were also killed battling the Army incursions into the highlands, one in 1983 and the other in 1989. Then a letter surfaced in my archives – Inés’ story spoken orally and transcribed, sent to me carefully typed on onion skin paper and airmailed in 1982 to my studio in New York. The stamp bore an image from the Popol Vuh.

Inés gave me a great gift – this concept of granito – how each of us have a tiny grain of sand to contribute to positive change – and I’ve carried it with me throughout my documentary filmmaking life, always trying to put it to use.  And always remembering Inés.

The Participation of the Indigenous Woman: Inés’ Story.  A letter to Pamela Yates and Tom Sigel about the experience of María Magdelena Pascal Hernández. 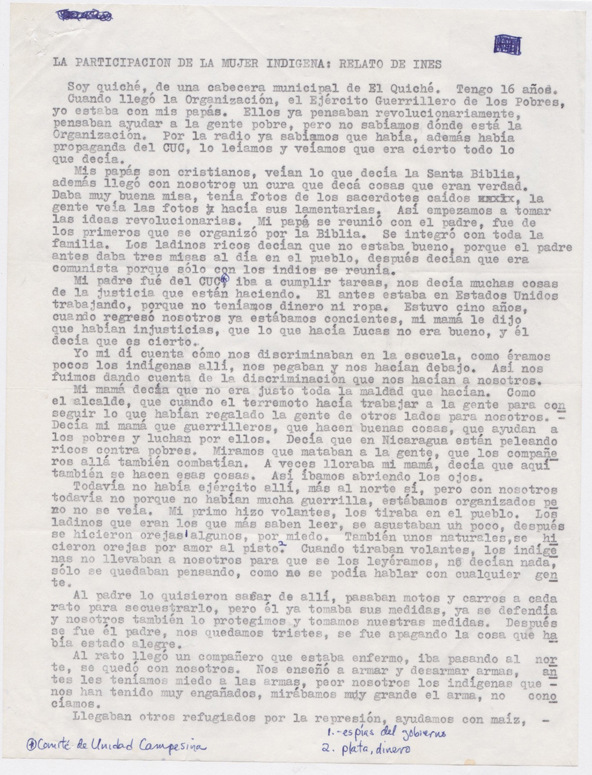 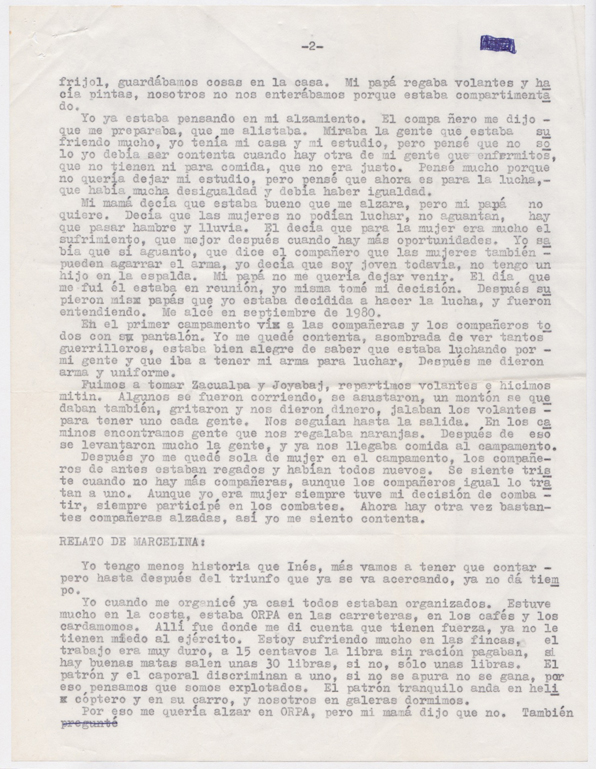 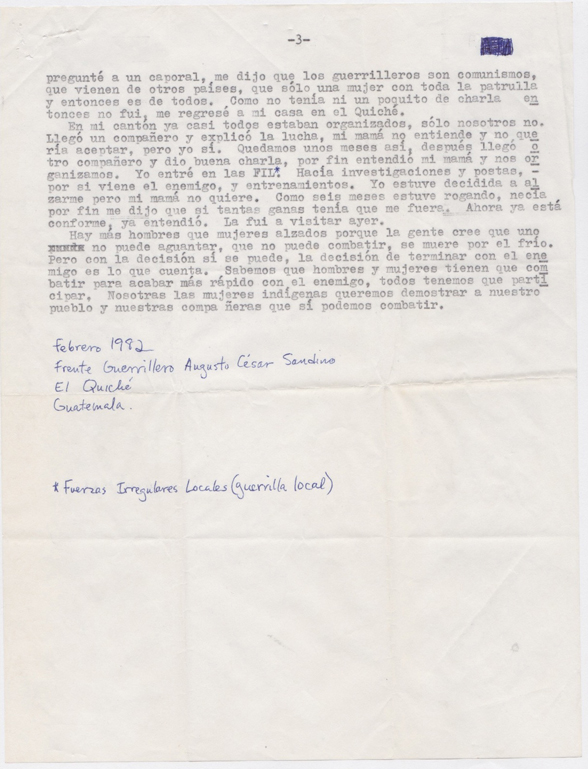 English Translation of the letter:

THE PARTICIPATION OF THE INDIGENOUS WOMAN: INES’ STORY

I am Quiché, from a municipal capital of El Quiché. I am sixteen years old.  When the Organization came, the Guerilla Army of the Poor, I was with my parents. They already had revolutionary ideas and wanted to help the poor, but we didn’t know where to find the Organization. We already heard on the radio that it existed. There was also propaganda from the CUC [United Peasant Committee]; we read it and could see that everything it said was true.

My parents are Christians, they knew what the Holy Bible said. There was a priest that came to our town and spoke the truth. He gave a very good mass, he had photos of the assassinated priests. People would look at the photos and make their confessions. That’s how we began to take up revolutionary ideas. My father met with the priest and was one of the first to organize for the Bible. He involved our whole family. The rich Ladinos said that the priest was a communist, because before, the father would give them three masses a day in the town, but now he would only meet with ‘los indíos’.

My father was in the CUC, he told us about their work towards justice. For five years he worked in the United States, because we didn’t have money or clothes. When he came back, we were already aware of the injustices. My mother told him about Lucas and the bad things he had done, and my father agreed.

I saw how they discriminated against indigenous kids in school, there were only a few of us, they would hit us and push us down. That’s how we became aware of the discrimination against us.

The army wasn’t there yet, it was mostly in the North, because there weren’t many guerillas in our community yet. We were organized but not yet visible. My cousin made flyers and would give them out in town. The more literate Ladinos got a little scared. Later, some of them became government spies out of fear. Some locals became spies too, because they wanted money.  When they handed out flyers, they wouldn’t bring them for us to read, they wouldn’t talk to us, they didn’t think it was safe to talk to just anyone.

They wanted to get rid of the priest.  Every now and then motorcycles and cars would come by to kidnap him, but he was already taking action to defend himself.  We were also trying to protect him.  When the priest left, we were so upset, the hope and happiness we felt began to fade away.

A while later, a sick comrade who was on his way to the North came and stayed with us. He taught us to put together and take apart guns.  We were afraid of guns before, they had the indigenous community so misinformed, we saw guns as something powerful and out of reach, we didn’t know.

Other refugees from the repression kept coming, we helped them with corn, beans, keeping things in the house.  My father was handing out flyers and painting on walls in the town, but we didn’t get involved because he kept it all separate from us.

I was already thinking about joining the uprising.  The comrade told me that I should prepare, that I should enlist.  I looked at my people who were suffering so much;  I had a home and went to school, but I didn’t think I should be the only one to be happy when others in my community were sick, some didn’t even have anything to eat–it wasn’t fair. I was conflicted because I didn’t want to leave my studies, but I thought now is the time to fight – there is so much inequality when there should be equality.

My mother said it was good that I enlist, but my father didn’t want me to. He said women can’t fight, they can’t take it, you have to go through hunger and rain. It’s too much suffering for a woman. He told me it will be better later when there are more opportunities. I knew I could take it, and the comrade said that women can carry arms. I said, I’m still young, I don’t have a child on my back. My father didn’t want to let me go. The day I left he was in a meeting, and I made the decision myself. After my parents found out that I had decided to join the struggle, they didn’t understand, but little by little they began to. I joined in September of 1980.

When I arrived at my first camp and I saw all the men and women in their uniforms, I felt happy and amazed to see so many guerillas.  I was proud to take up arms and fight for my people.  Then they gave me a gun and a uniform.

We went to take Zacualpa and Joyabaj, we held a meeting and handed out flyers. Some people were afraid and ran away, a ton stayed too, they cheered and gave us money, they took the flyers so that each person could have one. They followed us to the edge of town. On the roads we found people who gave us oranges. After that, many people came to our encampment and brought us food.

Then I ended up being the only woman at the camp, the comrades from before were sent out and then everyone was new. I felt sad when there weren’t any other women, even though the men treated me the same. Even though I was a woman and I had the choice to fight, I always participated in combat. Now there are lots of female comrades again, so I feel happy.

I have less to tell than Inés, we will have more to tell – but not until after the victory that’s getting closer now, right now there isn’t time.

When I got organized almost everyone else was already organized. I was often on the coast, OPRA [Revolutionary Organizations of the People in Arms] was on the highways, in the cafés and the cardamom fields. That’s where I realized that they were strong, they were not afraid of the army. I was suffering a lot on the fields, the work was very hard, they paid 15 cents a pound without paid rations – if there was a good harvest, it would yield 30 pounds, if not, just a few. The boss and the foreman discriminated against you, if you didn’t work quickly you didn’t earn, that’s why we think we’re exploited. The boss went around in the comfort of his helicopter and his car and we slept in shacks.

That’s why I wanted to enlist in the OPRA, but my mother said no. I also asked a corporal and he told me the guerrillas are communists, that they come from other countries, that only one woman with a whole patrol belongs to everyone. Since I couldn’t think of anything to say back, I didn’t go, I went back to my house in El Quiché.

In my area almost everyone was organized, we were the only ones that weren’t. A comrade came and explained the struggle to us, my mother didn’t understand and didn’t want to accept it, but I did. We stayed that way for a few months, then another comrade came and explained it well, my mother finally understood and we began to organize. I joined the Fuerzas Irregulares Locales (FIL). I did investigations and rounds, in case the enemy came, and training sessions. I had made up my mind to enlist but my mother didn’t want me to. I was begging to go for about six months, finally she told me that if I wanted to so much, I should go. Now she accepted it, she understood. I went to visit her yesterday.

There are more men than women enlisted because people think you can’t take it, you can’t fight, you die of the cold. But if you decide to, it can be done, the decision to beat the enemy is what counts. We know that both men and women have to fight to get rid of the enemy faster, we all have to participate. We indigenous women want to show our people and each other that we can fight.

*Violence and oppression worsened after the Earthquake in 1976. As foreign emergency aid flowed into Guatemala, Army High Command began to devise ‘get rich quick’ schemes using the money meant for land and resource development.  Land that campesinos and indigenous communities had rightful claim to (and had cultivated themselves) was seized by the military.  People were either made to work lands once promised to them or massacred in an attempt to rid the land of its people.